Digital technologies to be introduced into cadastre sector

On July 21, President Shavkat Mirziyoyev held a meeting to discuss the provision of complete land registration and public cadaster system, introduction of digital technologies into the sphere.
Accurate accounting and efficient use of land are very important for many spheres, such as agriculture, entrepreneurship, manufacturing, construction, geology. During his trips to the regions, the Head of the state always pays special attention to this issue, emphasizing that every inch of land should benefit the people.
Unfortunately, loads of problems have mounted up in geodesy, cartography and cadastre. The last time the land inventory was carried out in Uzbekistan was 40 years ago. For example, the administrative boundaries of 140 districts are still indistinct. The procedure for allocating agricultural land was adopted 20 years ago and hardly meets the requirements of the current reforms. As a result, theft and corruption increased in the sphere. Quite telling is the fact that in 66 districts, 150 thousand hectares of sown land was occupied in unauthorized way, and over the past two years, 122 employees of the cadastre service were brought to criminal liability.
In this regard, fundamental reforms have been spearheaded in the system, important issues of which were discussed during the meeting today.
President Shavkat Mirziyoyev noted that the main objective of cadastre bodies should be keeping records of lands. The task was set to launch, by the end of the year, an information system containing data on the type, contours, boundaries and users of land plots. From now on, the land allocation decision will be valid only if it is included in this system. 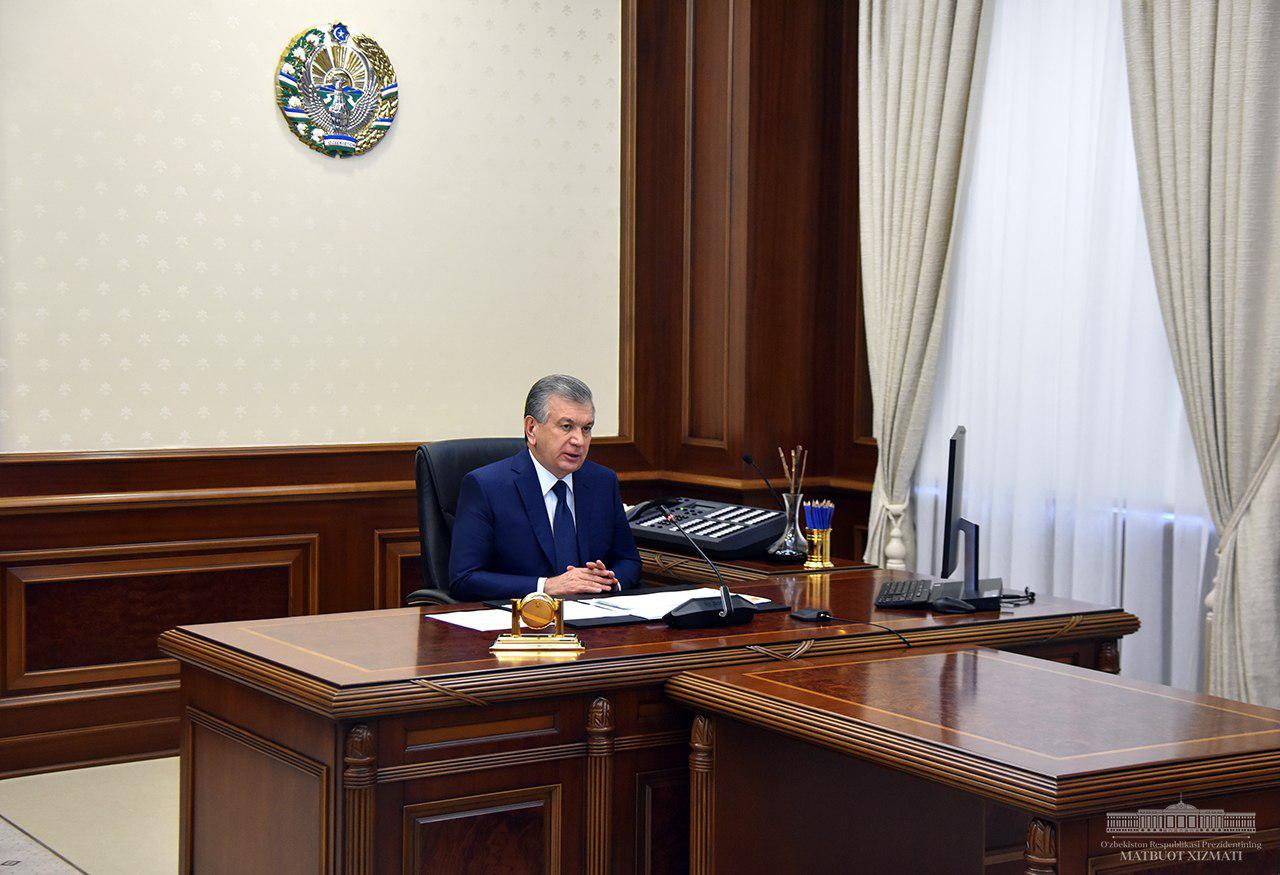 Instruction was also given to lease satellite channels and establish a signal processing system. This would contribute to the analysis of productivity and land reclamation by comparing satellite images taken across years.
The need for digitalization of agricultural management, balance and land accounting in the National Geographic Information System, starting next year, was noted. The executives in charge were urged to introduce, by the end of the year, the procedure for allocating agricultural land on the basis of an electronic bid and auction, optimization of land categories with participation of international experts.
Shavkat Mirziyoyev proposed to transfer the functions of the State Committee of the Republic of Uzbekistan on Land Resources, Geodesy, Cartography and State Cadaster in assessing soil quality, land development, placement of crops to the Ministry of Agriculture, as well as the Research Institute of Soil Science and Agrochemistry. The importance of developing the activities of the Institute and modernizing its laboratories for $87 million assigned by the World Bank was emphasized. The Ministry of Agriculture was instructed to produce soil analysis and agro-technological maps of 10 thousand hectares by the end of the year.
Another drawback in the field is the incompleteness of certain types of cadastres. Thus, the cadastre of highways was formed only by 23 percent, of cultural heritage sites – by 32 percent, of pipelines – by 32 percent, and of the urban planning cadastre – by 63 percent. In this regard, Olimjon Umarov, Advisor to the Prime Minister for Development of IT Technologies, was instructed to form a working group and develop a complete database of cadastres.
The meeting participants also deliberated on the issue of determining the real value of land in cities and villages and formation of a land market.
President Shavkat Mirziyoyev noted the low human resources potential of the sphere, 27 percent of employees of the State Committee on Land Resources, Geodesy, Cartography and State Cadaster have professional specialization differing from that required in their workplace. Therefore, the President noted the importance of establishing a branch of a foreign educational institution, developing cooperation with the University of Pisa, Italy, and Moscow State University of Geodesy and Cartography, Russia.
Executives in charge provided detailed information on the issues discussed. 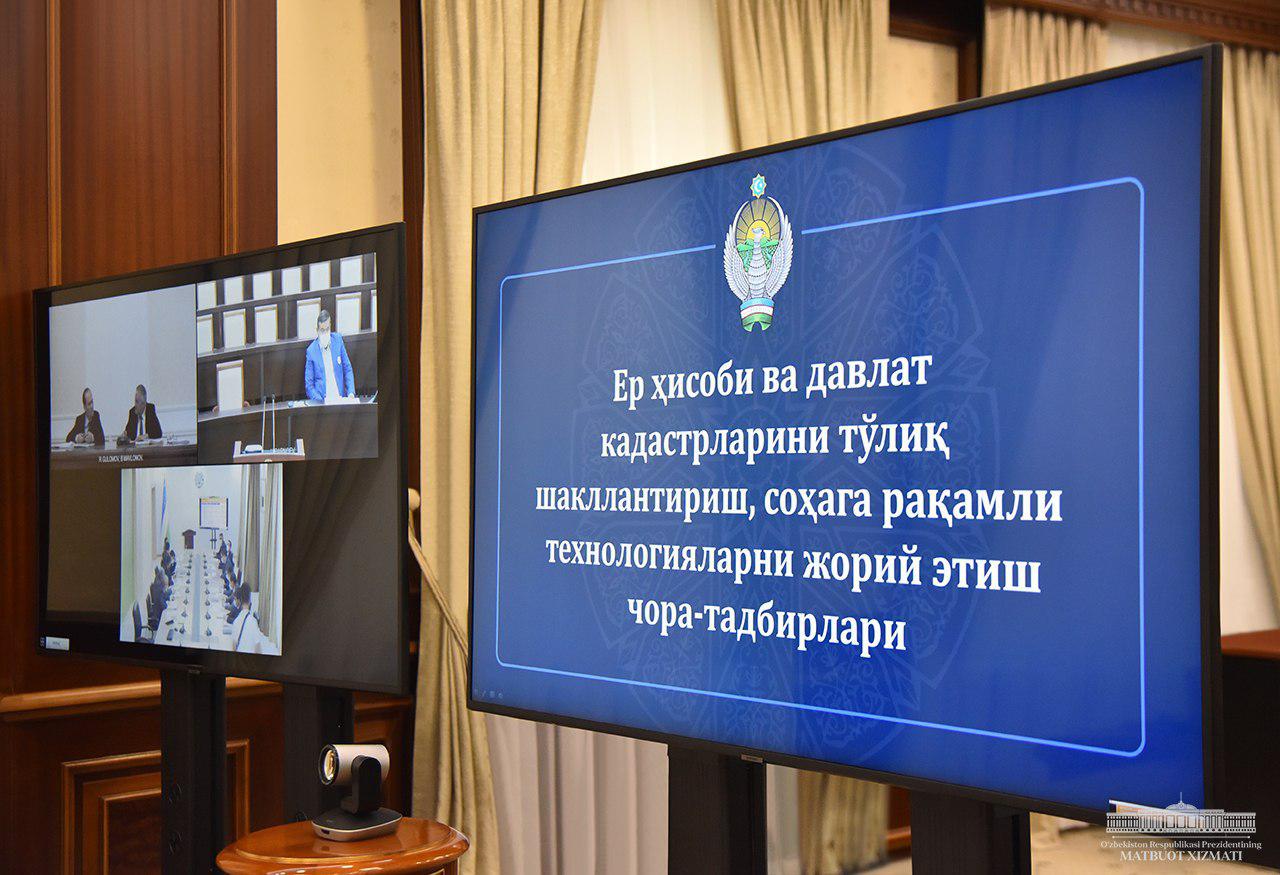 Telephone talk with Valentina Matvienko
Shavkat Mirziyoyev and Nursultan Nazarbayev
Telephone conversation with Kyrgyz President Sooronbai Jeenbekov
Birthday congratulations from Vladimir Putin
Presidents of Uzbekistan and Turkmenistan speak by phone
Emomali Rahmon congratulates Shavkat Mirziyoyev on birthday
Birthday greetings from the President of Kazakhstan
Shavkat Mirziyoyev: We have all reserves and capabilities to fight the coronavirus
Youth and women employment measures supplemented
President reprimands executives for unsatisfactory status of efforts to counter coronavirus in the city of Tashkent and Tashkent region
President: Conscientiousness of people should be our main tool
Leading industry projects presented
Protecting public health and economic stability are top priorities
Epidemiological situation in the capital and Tashkent region under discussion
President reviews the current responses to COVID-19 in the country
Digital technologies to be introduced into cadastre sector
The effectiveness of reforms in the construction sector considered
Shavkat Mirziyoyev congratulates the President of France